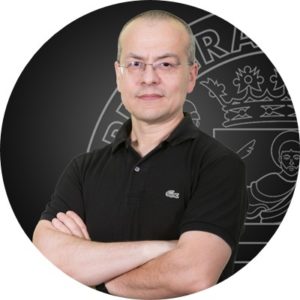 in Eng4Life he is the Chairman

His didactic activity consisted in monographic seminars and in being part of examination committees for all courses within the field of transport phenomena (S.S.D. ING-IND/24). As an assistant professor (2003-2014) he gave lectures (an average of 120 hours/year) for all the courses of the SSD, both for bachelor and for master degree levels, including the Master Degree in Food Engineering (an international course, whose lectures are given in English). As an Associate Professor (2015-present) he give courses for an average of 160 hours/year. He also given lectures for advanced courses (Ph.D. level). He was also advisor or co-advisor for more than 100 B.Sc. and M.Sc. thesis in Chemical Engineering and in Food Engineering and 6 Ph.D. thesis.

Research activities of Prof. Gaetano Lamberti was developed mainly at the University of Salerno. From October 2002 to April 2003 he worked for a period at the Mechanical Engineering Department at the Technical University of Eindhoven (NL). The activities were initially focused on the modelling of supercritical fluids-based processes, then to the characterization and processing of thermoplastic polymers. Recently, Prof. Gaetano Lamberti devoted his attention to the transport phenomena which take place in pharmacology, particularly to the hydration kinetics and to the release of bioactive molecules from pharmaceutical solid systems (tablets), made up of swelling hydrogels; and to the pharmacokinetics (release and distribution of pharmaceutics). As usual, his research activities were both experimental, to elucidate the transport phenomena, and modelling, to describe the observed phenomena. The results of his researches, and an overview on his research group are summarized in the web site www.gruppotpp.it.

He has produced over 200 works of which more than 110 are publications in international journals, indexed on the Web Of Science and Scopus databases. In December 2019, according to Web Of Science Core Collection, the h-index of Prof. Ing. Gaetano Lamberti was 27 (129 registered works, 1.900 citations), according to Scopus the h-index was 28 (131 registered works, 2.019 citations).

Prof. Ing. Gaetano Lamberti is listed in the “Engineering” section of the Top Italian Scientists website. The site lists the researchers with the greatest impact in the scientific field of reference, an impact measured with the h-index value (Google) considered significant when greater than 30.